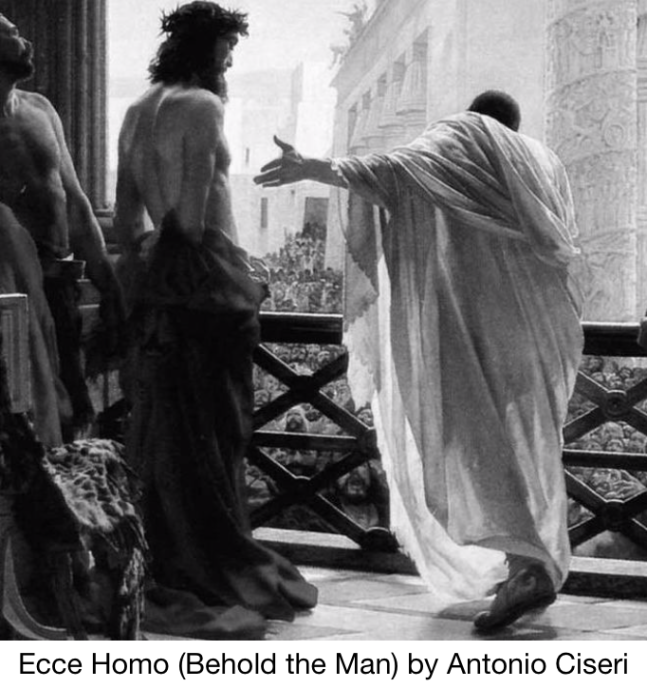 You may know of a story in the Bible that features Pilate; if not, here’s a summary. He stood before an angry crowd of people accusing a man named Jesus the Messiah of blasphemy, because his teachings challenged the systems that benefited the elite and did harm to the most vulnerable. In an effort to keep the crowd from rioting he agreed to release someone to them, so he pulled out a man named Jesus Barabbas who had recently been arrested himself. With both men standing before the crowd he asked, “Who shall I release to you?”

They responded with conviction:

I think this is significant for several reasons. In the Gospels of Mark and Luke, it is noted that Barabbas was in prison with other insurrectionists who had committed murder in a violent uprising. In contrast, Jesus told his disciples to put away their swords after they attacked the ones who came to arrest him. In the Gospel of John, Barabbas is referred to as a “bandit,” using the same Greek word as Josephus, as a contemporary historian, did when he was describing “violent revolutionaries”.*

Barabbas was more than just a “thug” or a “common criminal.” Barabbas was understood as a violent revolutionary, the antithesis to Jesus the Messiah.

The two could not have been more different:

Jesus the Messiah represented a different way of living in the oppressive regime of Rome. Jesus Barabbas provided a simpler option, while Jesus the Messiah came and challenged both the political and religious establishments, calling them out on their treatment of the most vulnerable. His teachings called for peace, living a life of simplicity in service to others.

Choosing the way of Barabbas is easier, and it is almost certainly one we would have chosen. Actually, we do this more often than we would think. We choose the way of Jesus Barabbas when we are more concerned with our rights than our responsibilities.

The way of Jesus the Messiah was starkly different, and for some reason we think we follow this Jesus just because we gather a couple days a week under a steeple and behind stained glass. We want to whitewash the world we live in, neglecting our real responsibility to societal change, so we reject those who speak for it. We reject those who desire to speak appropriately, peacefully, and reverently about serious issues such as racial inequality, hunger, welcoming the stranger, healthcare, the housing crisis, income inequality, and sexism. We praise the politicians who defame one another, when what we really need is to focus on what we are for rather than who we are against. To choose Jesus the Messiah is to:

Choose this day who you will serve: Jesus Barabbas or Jesus the Messiah?

If you find this essay valuable, please feel free to share it with others.